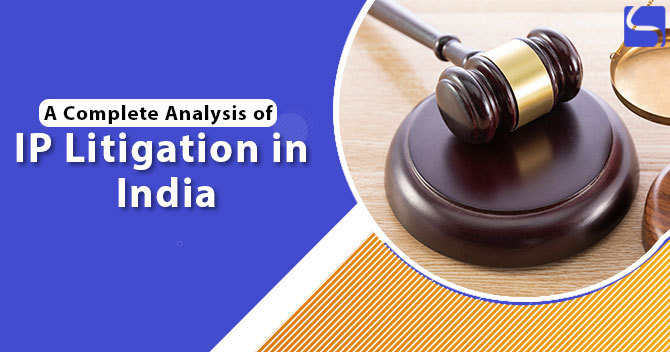 What is IP Litigation?

Importance of IP Litigation in India

IP Litigation in India is fair and suitable that the individual putting in the efforts & skills in an intellectual invention is provided with some advantages as an outcome of their hard work and dedication. For this reason, the legislation in India protects such innovations or inventions and creative works in the method of the Trademarks Act, 1999, the Copyright Act, 1957, the Patent Act, 1970, the Semiconductor Integrated Circuits Layout Designs Act (SICLDA) 2000, and the Designs Act 2000. These acts give an exclusive right to the IP owners concerning their Intellectual Properties (IPs). When Intellectual Property is safeguarded by such laws or Acts, they become intangible assets and act as a method in increasing the valuation of artistic creations, brand names, and inventions.

Meanwhile, over the years, many types of Intellectual Property disputes have also come to light with the arrival of IT (Information & Technology). Such conflicts are evident in the form of Trademark Infringement, Patent Infringement, Copyright Infringement, Design Infringement, Domain Names Disputes, and Passing-off. This makes it essential to know the growth of IP Litigation in India.

Discussing IP Litigation in India and its Development

An Overview of IP Dispute in India

What are the Recent Trends in IP Litigation in India?

With the closing of the Intellectual Property Appellate Board (IPAB), the pending cases are going to be listed before the commercial benches of different High Courts. This new development or improvement has received mixed reviews from different reputed legal personalities; while some reviewed the closure of the tribunal whereas, others appreciate the move.

In 2003, the tribunal was established under Trademarks Act, 1999[1], and was exercising actual and appellate jurisdiction under the condition of Patents Act 1970, Copyright act, 1957, Geographical Indications of Goods (Registration & Protection) Act, 1999, and Trademarks Act, 1999.

The speedily developing IP Litigation in India makes sure that the rights of IP holders are duly recognised & effectively enforced by courts. Such trends show that the viewpoint is encouraging for IP owners in the times to come. With the closure of the Intellectual Property Appellate Board, it is observed that due to the tribunal absence, an increasing number of parties will choose another dispute resolution process. This new wave of processes will cover the way forward for IP Litigation in India.

Read our article:Examining Technology Transfer Agreement from the Perspective of IPR and Competition Law What are the Major IP Mistakes Made by Start-ups?

Implementing an idea into action successfully is what converts small start-ups into million dollars of business or company. IP (Intellectual Property) for start-ups consist of Trademarks, Copyrights, Patents, Designs, and...