MSME/SSI  Registration is mandatory for small business entities. It will help them in availing subsidies, incentives, concessional rate loans and other registration benefits offered by the government. The eligibility criteria to obtain the MSME/Udyam/Udyog Aadhaar registration certificate differs on the basis of the investment in plant and machinery..

How to Start a MSME Registration

What is an MSME/SSI/Udyam Registration?

The Micro, Small and Medium Enterprises (MSME) are considered essential for our Indian Economy as this sector not only acts as a job creator for our youth but also plays a crucial role in the Industrialization of the Rural and Backward areas. An MSME Registration is obtained as per the MSMED Act. However, obtaining registration is not at all mandatory, but it shall be taken into consideration that the businesses or entity with MSME Registration are eligible to avail the benefits and schemes made by the Government.

Further, MSMEs and SSIs (Small Scale Industries) are eligible to obtain registration under the MSMED Act. Furthermore, according to the MSMED (Micro Small and Medium Enterprise Development) Act, 2006, the term MSME includes the following two listed:

However, the same distinction has been eliminated by the Ministry of Finance by way of an announcement made on May 13, 2020.

What is a Micro Small and Medium Enterprise?

As per the MSMED Act, 2006, MSMEs and SSIs were enacted to strengthen and boost the Small-Scale sector in India. Earlier, both Service and Manufacturing were considered distinct and separate from each other, having different amount prescribed for the Investment Required.

However, as per the latest amendment made in the definition of MSME by the Ministry of Finance, the difference between the manufacturing and service sectors has been eliminated, Investment Limits have been Revised, and a Turnover Criteria has been introduced. This amendment was announced by our Finance Minister, Mrs. Nirmala Sitharaman, on 13 May 2020. The following listed are considered as MSMEs under the MSMED Act, 2006:

Benefits of MSME Registration in India 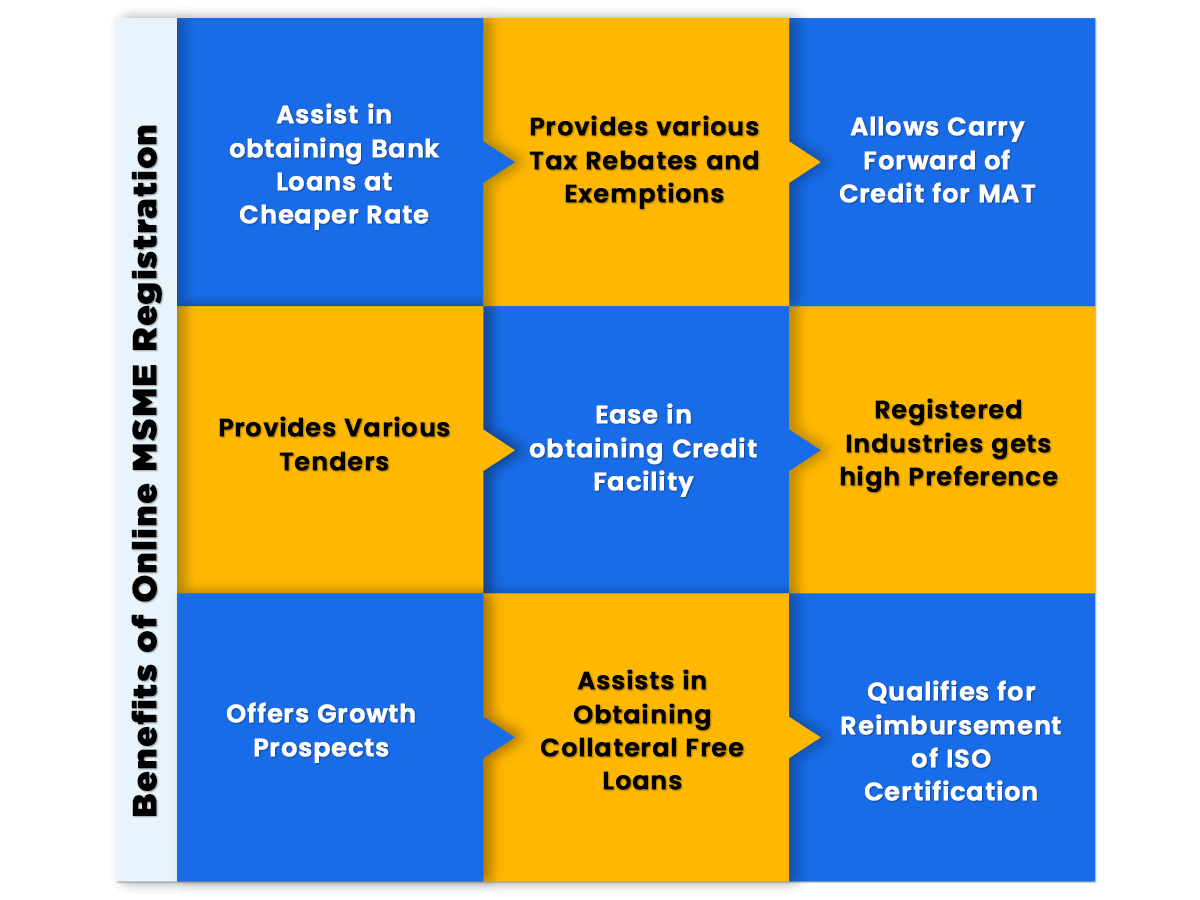 Eligibility Criteria for Register an MSME/SSI in India

To become eligible for obtaining MSME Registration, the owner is required to invest less than Rs 20 Crores and must have a turnover of less than Rs 100 Crore (as per the amendment made on 13 May 2020) in plant and machinery either for a Manufacturing or Service Sector.

If, at any point in time, these industries exceed the investment limit, then they are required to surrender or cancel their MSME Registration provided under the MSMED Act.

Who can Apply for Registration under MSME Act? 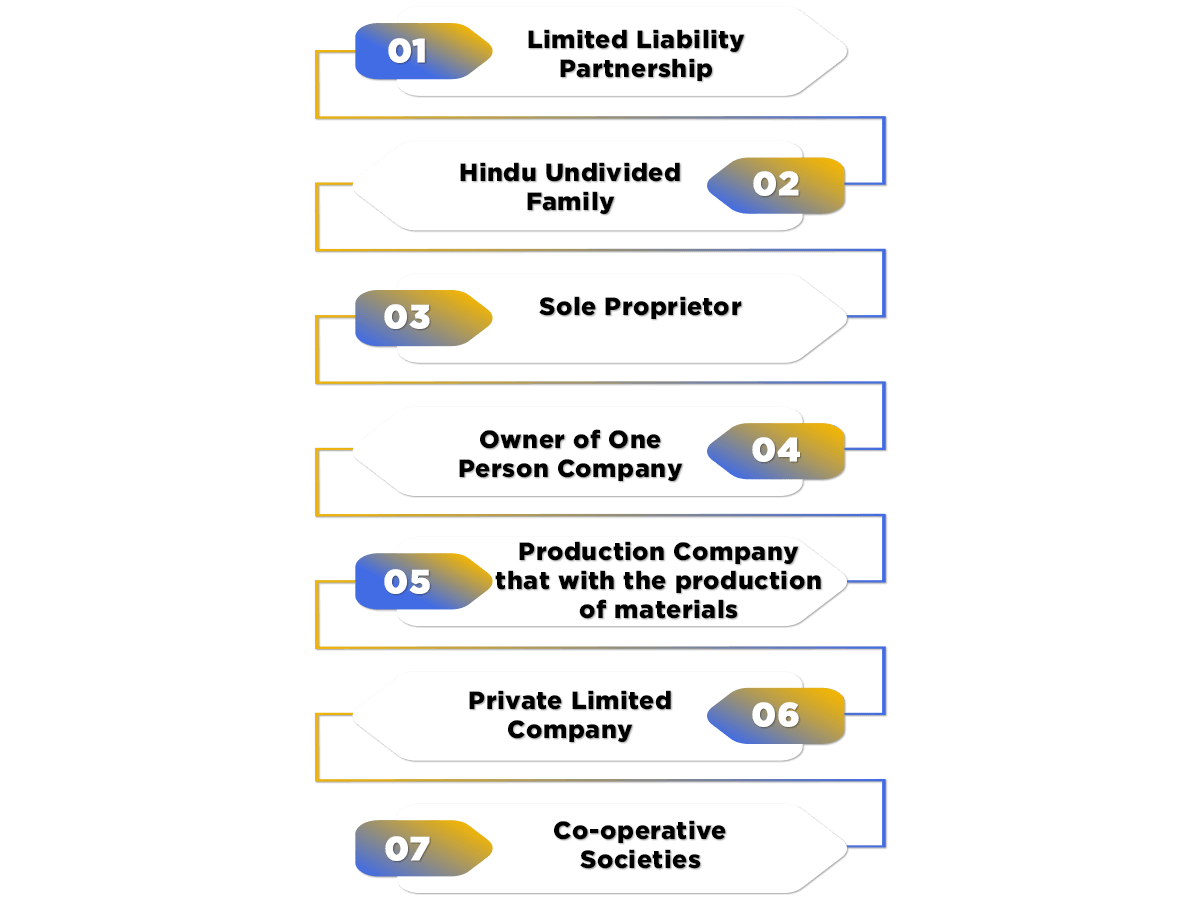 Anyone who can fulfill either one or multiple criteria mentioned below are eligible to apply for registration under the MSME Act:

Significance of MSME Registration for SSI

The points that deals with the significance of MSME Registration is mentioned below:

The documents needed for obtaining online MSME Registration are as follows: 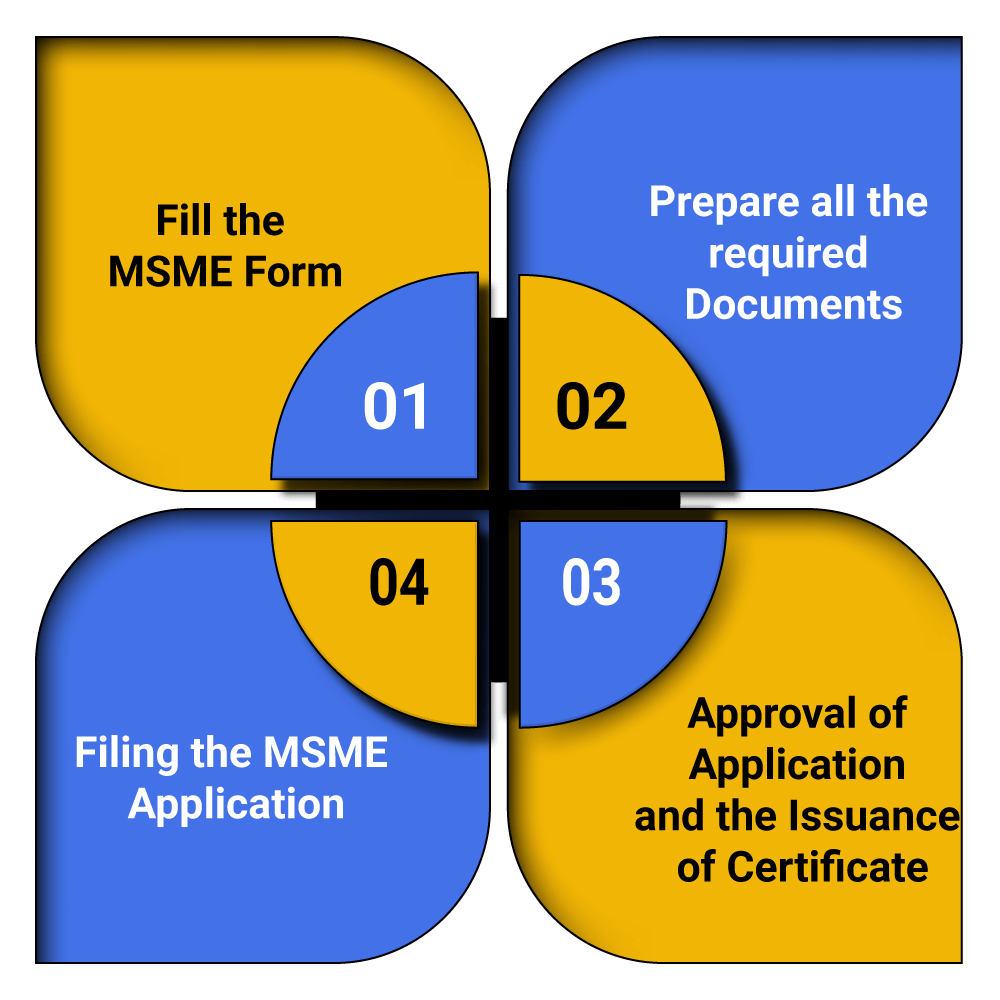 The steps involved in the process of obtaining MSME Registration are mentioned below:

Who has the Authority to Issue MSME Registration Certificate?

The process of obtaining MSME registration is entirely done online, and every state has its own separate department to deal with this. Further, the DIC (District Industries Centre) is responsible for MSME registration. The DIC department also has the power to issue the MSME Registration Certificate along with the MSME Number.

What are the Details be submitted for MSME Registration in the Application Form?

Following are the list of documents and information that you have to provide as per the application form:

What is the meaning of the word “MSME”?

The term “MSME” stands for Micro, Small, and Medium Enterprises. It is defined under the MSMED Act, 2006 based on the investment made in plant and machinery and equipment.

What was the reason behind the Modification of MSME definition?

As per the latest amendment announced by the Finance Ministry on 13.05.2020, the definition of the term “MSME” has been modified after the elimination of the difference between the manufacturing and service sector, along with the revision in investment limits and introduction of turnover criteria.

Why is there a need for an individual to apply for MSME Registration before commencing his/her business operations?

The main reason behind the need to apply for MSME Registration is that it helps the owner to obtain clearances from various governmental bodies.

What is the Validity Period for the MSME PRC (Provisional Registration Certificate)?

A Provisional Registration Certificate (PRC) remains valid for a period of 5 years. That means the applicant needs to apply for its renewal, or else PRC will lapse.

Is it Mandatory to obtain MSME/Udyam Registration?

No, it is not obligatory and compulsory for an individual to obtain MSME registration in India. However, an MSME Registration will act as a medium to avail of several government benefits, such as subsidies and incentives.

What is Udyog Aadhar?

The term “Udyog Aadhar” denotes an Aadhar issued by the MSME Department in the business name. This is issued only to an MSME (Micro, Small, and Medium Enterprises) and is a 12-digits Identification Number.

How can an MSME Registration assist an individual in obtaining Loans from the Bank?

Usually, MSMEs over regular business entities become the first choice for the banks to grant loans. Further, the interest rates offered on loan for MSMEs by the banks are comparatively lower than those offered for normal business entities. Also, preferential treatment is given to an MSME in case of a delay in repayment.

How is the Valuation of Plant and Machinery done to obtain MSME Registration?

The original value of a Plant and Machinery is taken into consideration for obtaining MSME registration.

In which Cities, Swarit Advisors provides the services related to MSME Registration?

Is Aadhar Card compulsory for the Udyog Aadhar Scheme Registration?

Yes, Aadhar Card is a compulsory requirement for obtaining Udyog Aadhar Scheme Registration in India. Further, if in case the applicant is other than the sole proprietor, then the Aadhar card of the said partner or director will be needed.

No, the MSME sector deals only with the Manufacturing and Service Industries. That means the Trading companies are not included under the domain of MSME. Moreover, the MSME sector supports start-ups by providing them subsidies and benefits, but trading companies are just similar to intermediaries, i.e., a link between the customer and manufacturer. Therefore, they are not covered under the scheme.

How many Items are being reserved to be manufactured by MSMEs?

Till date, in total, 20 items are being reserved to be manufactured only by the MSME sector.

Does an Individual need Multiple Registrations for Opening Manufacturing Plants in Different Cities?

No, the MSME or the Udyog Aadhar certificate is enough for a single entity regardless of multiple branches or plants. However, it shall be relevant to note that the information concerning all the various branches or plants must be furnished.

What is the genesis of Udyog Aadhar?

The Ministry of MSME notified that Udyog Aadhar is taking a cue from the Prime Minister's radio show named “Man ki Baat” held in September 2015.

What is an NSIC?

The term “NSIC” stands for the National Small Industries Corporation. It is an organisation that arranges raw materials in bulk for small businesses and is also a part of the Ministry of MSME.

Who are all eligible to apply as Micro Enterprise?

The entities eligible to apply as Micro Enterprise are the ones that are having the investment in Plant and Machinery up to Rs 1 crore and Turnover up to Rs 5 crore.

Who are all eligible to apply as Small Enterprise?

The entities eligible to apply as Small Enterprise are the ones that are having the investment in Plant and Machinery up to Rs 10 crores and Turnover up to Rs 50 crores.

Who are all eligible to apply as Medium Enterprise?

The entities eligible to apply as Medium Enterprise are the one that are having the investment in Plant and Machinery up to Rs 20 crores and Turnover up to Rs 250 crores.

What is MSME Form-1?

The form used by the MSMEs (Micro Small and Medium Enterprises) to file their half-yearly returns in the context of their outstanding payments, reasons for the delay, etc. is MSME Form- 1.

What is the meaning of the term “Credit Rating”, and is it mandatory to obtain credit rating?

The term “Credit Rating” denotes an estimate to figure out the ability of an enterprise or an entity to meet all the financial needs on the basis of the previous year dealings. Further, it is not compulsory to obtain a credit rating. However, it is suggested that all the MSME borrowers get their credit rating done as it would assist them in the credit pricing of the loans taken from banks.

Yes, it is mandatory to have an Aadhar Card to obtain MSME Registration in India.

Yes, MSMEs are qualified to obtain Collateral free loans from banks up to Rs 10 Lakhs.

Is the Credit Score necessary for MSME Registration?

No, Credit Score is not necessary for MSME Registration.

Do I get a physical or hard copy of the MSME Certificate?

The MSME certificate is provided online, the registered applicant can download it as per his/her requirement from the portal.

What is the full form of MSME?

The term “MSME” stands for Micro, Small, and Medium Enterprises.

What are the Examples of MSME Companies in India?

Can a Sole Proprietorship Firm apply for MSME Registration in India?

Yes, a Sole Proprietorship Firm can apply for MSME Registration in India.

What does SSI stand for?

Does Publishing books come under the ambit of the MSME Sector?

Yes, Publishing Books comes under the ambit of the MSME Sector.

What are the Benefits of MSME/Udyog Aadhaar Registration?

Can new and existing business apply for Udyog Aadhar or MSME Registration?

Yes, both new and existing businesses can apply for MSME or Udyog Aadhar registration in India. However, in the case of existing unit, it should not only be functioning but must also meet the threshold limits for the registration.

Is it possible for an individual to obtain MSME Registration by applying himself?

Yes, an individual can apply for MSME registration on his/her own. He/she just needs to visit the government’s official portal. However, it is always advised to take assistance from experts as it reduces the scope of mistake.

When an Initial and a Half-Yearly Return needs to be filed?

Can we file MSME Form-1 with the “Zero” due or outstanding amount?

No, an MSME Form-1 cannot be filed with a “Zero” outstanding amount.

There is no difference between them both, and earlier, the MSME Registration was known as the SSI (Small Scale Industries) Registration.

COVID-19 Impact on MSMEs in India – An Overview

Every country in the globe is on high alert after announcing Covid-19, a global pandemic by the WHO (World Health Organisation). This pandemic impacted the countries' economies all around the... 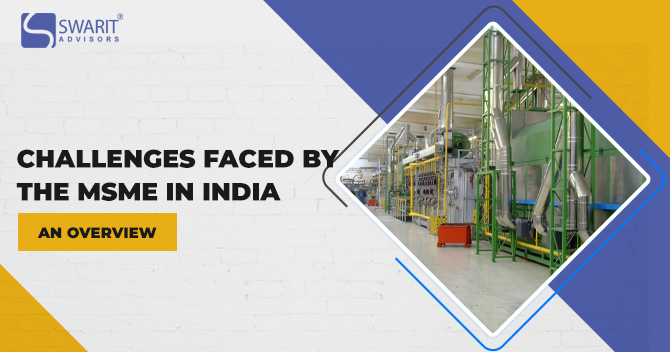 Challenges Faced by the MSME in India – An Overview

The assistance made by the informal sector to the economy of India is substantial. The fact is that India's growth relies considerably on MSMEs that contribute substantially to the GDP...