Nidhi Company Registration is entirely an online based process. It is a type of NBFC, and for incorporating it, the applicant company is needed to be registered with the MCA. Nidhi business structure is a best suitable for the young entrepreneurs who wants to enter the world of finance business.

How to Start a Nidhi Company Registration

Nowadays, Nidhi Company has evolved as a popular lending mechanism for obtaining secured loans. These companies are most predominant in the Southern Parts of India. Moreover, the operations and the affairs of this company is very much similar to that of a Co-operative Society. Further, section 406 of the Companies Act, 2013, deals with the process of Nidhi Company Registration.

Furthermore, the prime reason behind incorporating this business structure is to encourage and motivate its members to save, so that they can smoothly and with ease satisfy their financial needs arising from time to time. Hence, this company is based on the principle of Mutual Benefits.

What is a Nidhi Company?

The term Nidhi Company refers to a type of NBFC (Non-Banking Financial Corporation) which is regulated and governed by the provisions of the Companies Act, 2013. The only significant feature that differentiates this Company from other companies is that this business structure deals with the deposits from and loans to its members, i.e., shareholders only, and works just for the mutual benefits of its members.

Further, it shall be noteworthy to take into consideration that the activities of this business structure do fall under the ambit of RBI (Reserve Bank of India), as it is similar to that of an NBFC. However, RBI has excused this Company from the core provisions of the RBI Act, 1934 and other regulations prevalent on an NBFC, as these Companies deals only with the money of its shareholders or members. 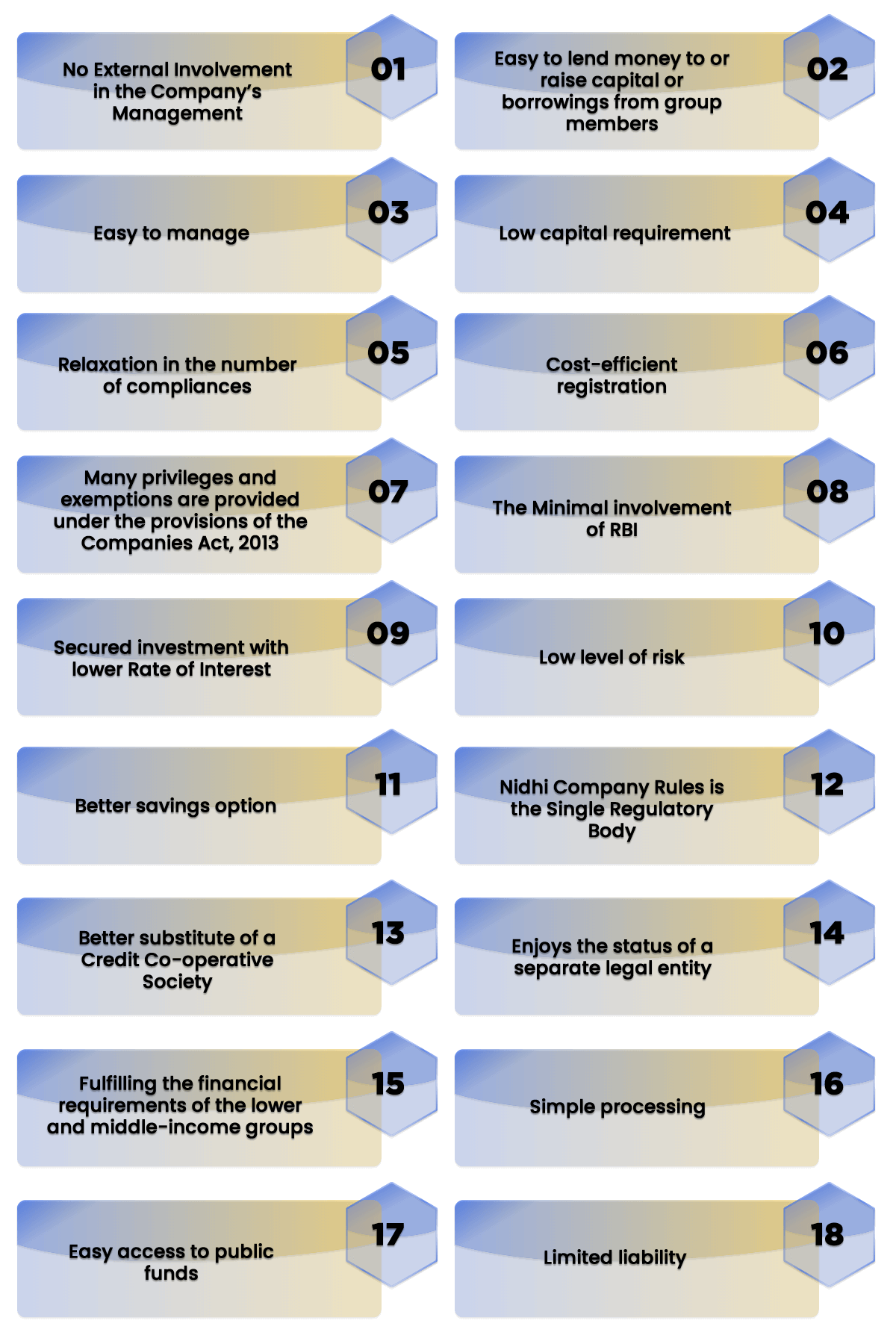 In India, the benefits of a Nidhi Company registration can be summarised as: 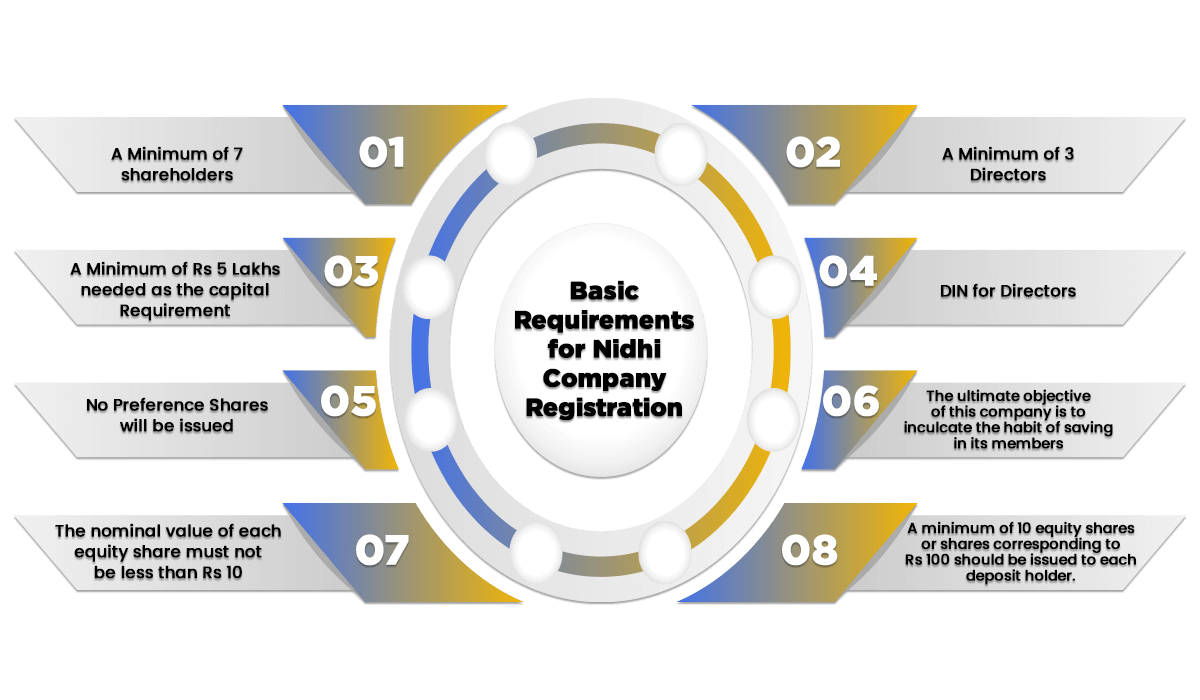 The basic requirements for Incorporating a Nidhi Company are as follows: 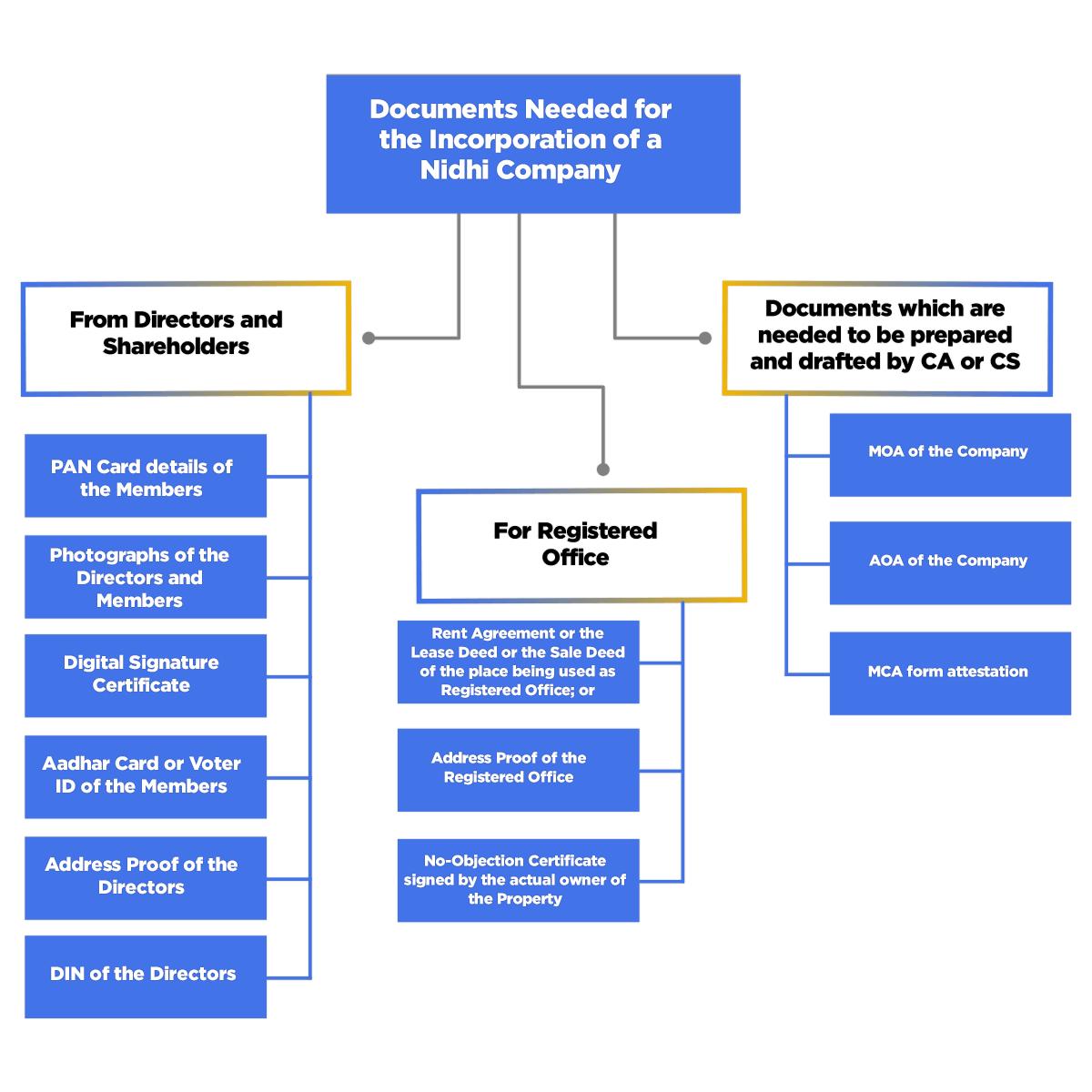 The documents needed for obtaining nidhi company registration can be summarized as: 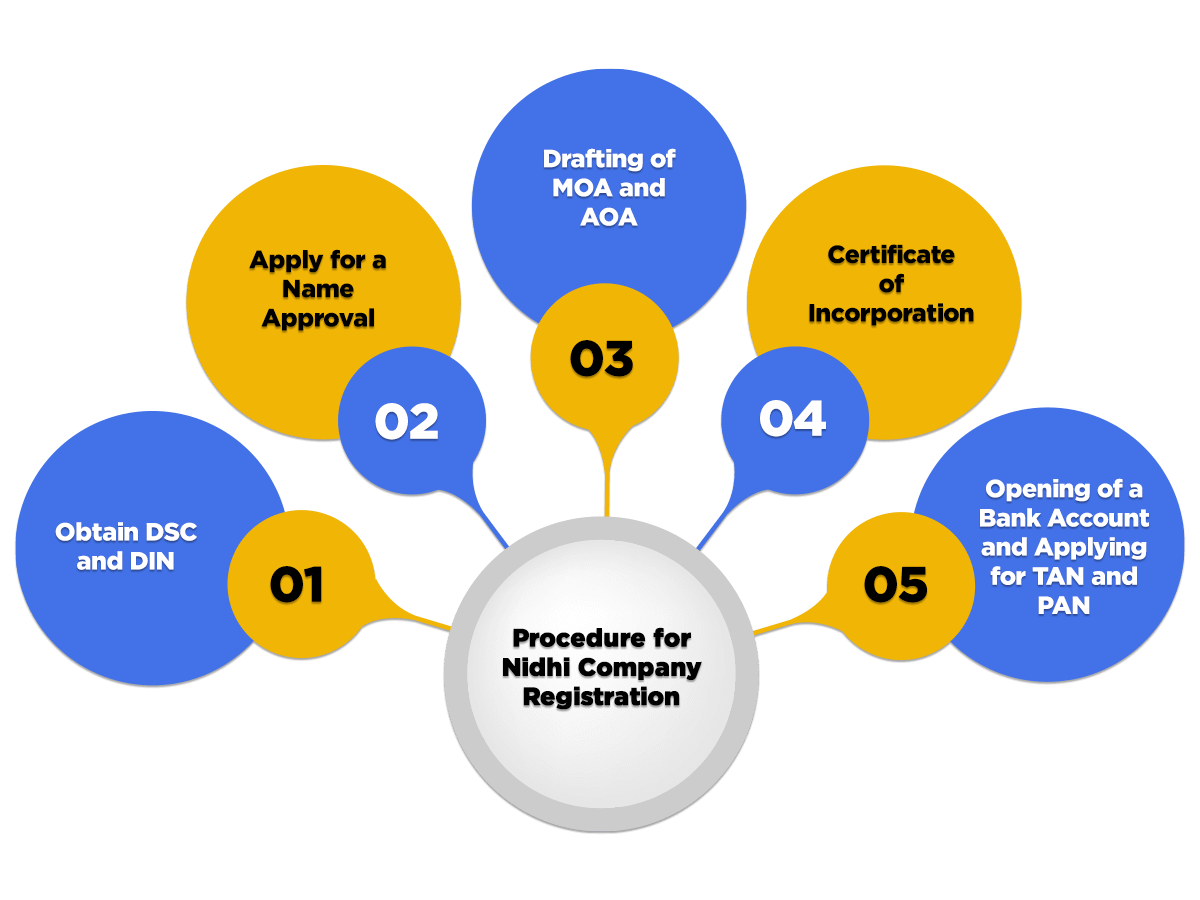 The steps involved in the procedure for obtaining nidhi company registration are as follows: 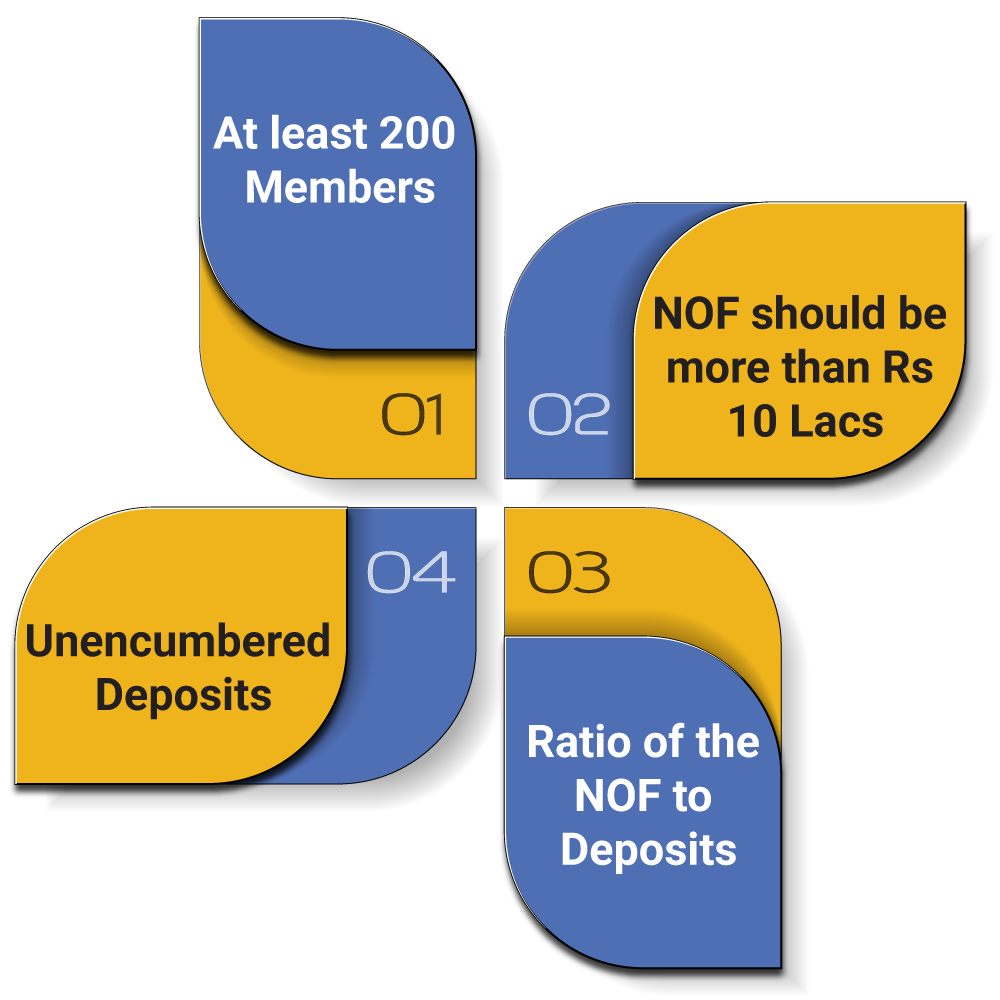 The Post-Nidhi Company Registration requirements can be summarized as:

Further, this business structure also needs to file a Half-yearly Return with the ROC (Registrar of Companies) in Form NDH-3 (again duly certified by a Practicing CA/ CS/ CWA) together with the prescribed fees. Moreover, such form must be filed within a period of 30 days, starting from the end of each half-year. 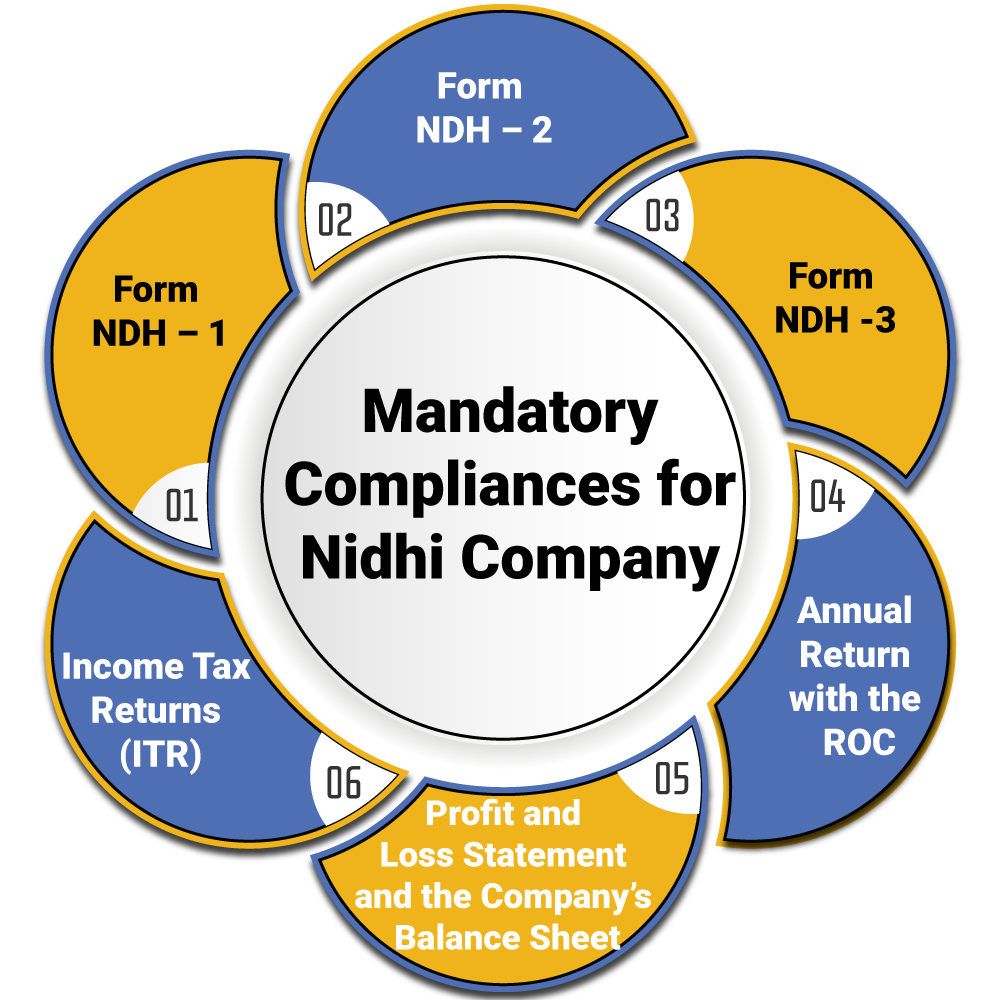 The mandatory compliances for a Nidhi Company registration are as follows:

Ceiling Limit on the Loans Provided by a Nidhi Company

The ceiling limit on the loans provided by Nidhi Companies can be summarized as:

Is Nidhi Company Allowed to have Branches?

Yes, a Nidhi Company is allowed to have branches but subject to following conditions:

Factors to Consider while Choosing Name for Nidhi Company 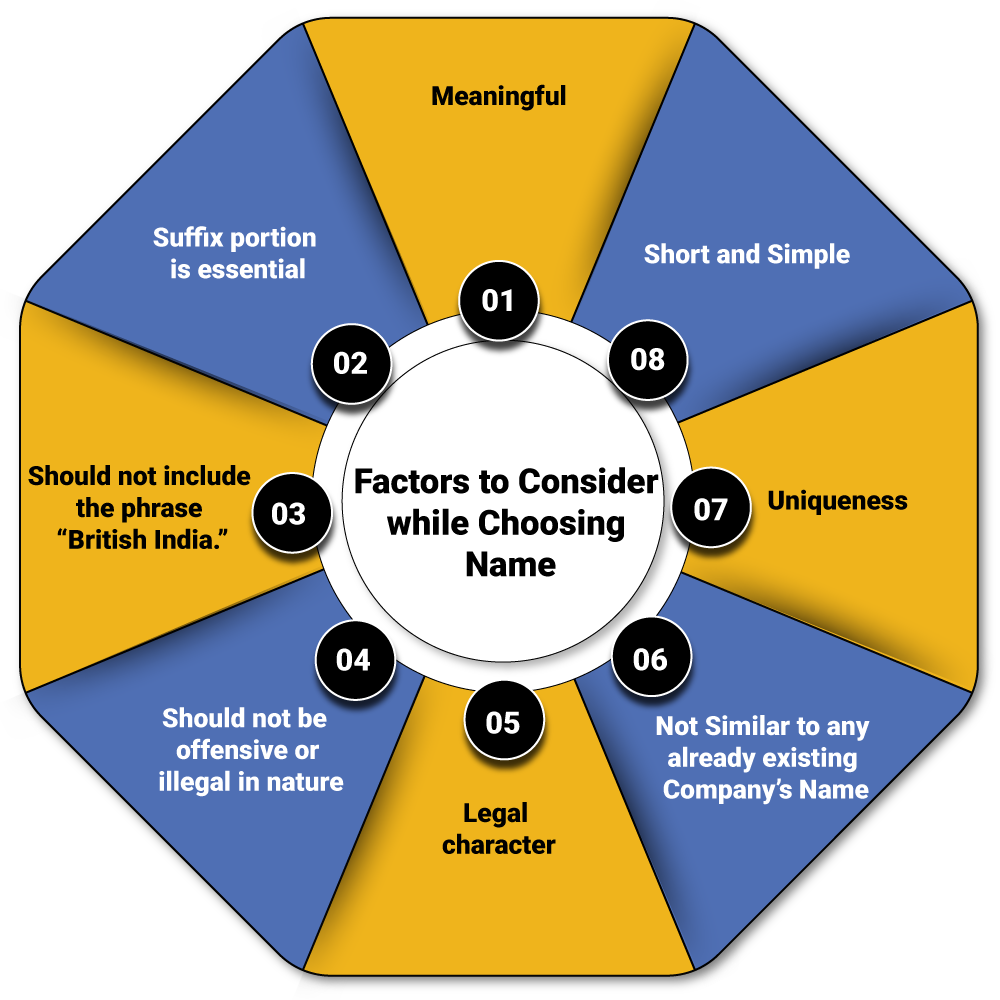 In India, the factors to be considered while a name for the company are as follows:

In India, the Restrictions applicable to Nidhi Companies in terms of their activities are as follows:

Rules regarding the Acceptance of Deposits

The rules regarding acceptance of deposits can be summarised as:

What is the Average Timeline for Setting up of a Nidhi Company?

An average period of 15 business working days is required for setting up of a Nidhi Company.

Is it necessary to use the word “Nidhi Limited” in the Name of the Company?

Yes, it is necessary to use the word “Nidhi Limited” in the name of the company. However, the term “Mutual Benefit” can also be used.

What is the Minimum Number of Individuals required for a Nidhi Company Registration?

A minimum of three directors and seven shareholders are needed for incorporating a Nidhi Company.

Can a Minor become the Director in a Nidhi Limited?

Is it Necessary for the Promoters to present themselves before the Authority for the purpose of Registration?

No, there is no need for anyone to visit our office personally, as the process of Nidhi Company Registration is completely online.

What all Documents are required for Nidhi Company Registration?

Is there any Limitation on the Maximum Number of Members in a Nidhi Limited?

No, there is no upper limit prescribed for the maximum number of members. However, it is mandatory for a Nidhi Company must have a minimum of two hundred members by the end of the 1st financial year.

Can a Convicted Person become a Director or Shareholder in a Nidhi Limited?

No, a convicted person is not eligible to become a director or shareholder in a Nidhi Company.

A DIN or Director Identification Number is a unique identification number given to every director by the Ministry of Corporate Affairs. It has lifetime validity, and a director can never be allotted with two DINs.

What is the Validity of Certificate of Incorporation?

A Certificate of Incorporation has lifetime validity, or till the time the company’s name is not struck off by the ROC (Registrar of Companies).

Can a Member who has earlier Defaulted in a Loan from Nidhi company, can again borrow from the Nidhi?

No, a person who has earlier defaulted in a loan from Nidhi Company cannot borrow again from the Nidhi.

What is the Costing involved in a Nidhi Company registration?

The government fees differ from state to state. Hence, there is no uniform costing. However, the whole process cost ranges from Rs 16000 to Rs 30000.

No, Nidhi Company is not qualified to issue unsecured loans. However, it can issue Secured Loans to its shareholders or members.

Can a Nidhi Company operate in more than one state?

No, a Nidhi Company is not allowed to operate outside the state in which it is registered.

Can the Profits from a Nidhi Company be invested in any other business?

No, the profits earned from a Nidhi Company cannot be invested in any other business.

What is the term prescribed for Fixed Deposits in a Nidhi Company?

A minimum of 6 months and a maximum of 60 months period is prescribed for fixed deposits in a Nidhi Company.

What is the term prescribed for Recurring Deposits in a Nidhi Company?

A minimum of 12 months and a maximum of 60 months period is prescribed for recurring deposits in a Nidhi Company.

What is the Maximum Qualifying Balance in Savings Deposit account for Interest Computation?

Does the Reserve Bank of India regulate Nidhi companies?

No, Nidhi Companies are exempted from the core NBFC provisions of the Reserve Bank of India.

A Nidhi Company is not regulated and governed by the provisions of RBI. Moreover, Nidhi Company Registration requires a much smaller amount of capital than Rs 2 Crore paid-up capital requirement for NBFCs.

Who is the Regulating Authority for Nidhi Company?

The regulations passed by the Ministry of Corporate Affairs and the provision of Nidhi Rules, 2014 act as the regulating authority for Nidhi Company.

From whom can a Nidhi Company accept Deposits?

A Nidhi Company can accept deposits only from its Registered Members.

No, only an NBFC after the approval from RBI can start Micro Finance Business in India.

No, a Nidhi Company is not allowed to issue Preference shares and Debt Securities.

Can Nidhi Company Purchase Securities of any other organization?

No, a Nidhi Company cannot purchase securities and shares from any other organisation.

Can a Nidhi company open a Current Account with its members?

No, a Nidhi Company is not allowed to open a Current Bank Account with its shareholders or members.

Can Nidhi Company carry on any activity other than Lending and Borrowing?

No, a Nidhi Company is not allowed to carry out any activity other than Lending and Borrowing.

What should be the objects of a Nidhi company?

The primary objective of a Nidhi Company is to carry out the business of accepting deposits and lending money to its registered members. This company must aim to inculcate the habit of thrift and savings amongst its shareholders.

What shall be the maximum tenure of directors in Nidhi Company?

A director of Nidhi Company can hold his/her office for a period of 10 consecutive years. However, he is eligible for re-appointment only after the expiry of 2 years starting from the date of cessation of his term.

What is the maximum limit up to which a Nidhi company can accept deposits?

DSC is the acronym for Digital Signature Certificate. This means digitally or electronically signing the documents by an authorized person. Moreover, DSC is used for signing the electronic forms and statements. However, it cannot be used in the case of physical documents.

How many branches can a Nidhi Company open in a District?

A Nidhi Company is allowed to open only three branches within a district. However, to open more than three branches, the said company is must seek prior approval of the RD (Regional Director) for every additional branch.

What is the Eligibility Criteria to be a Director in a Nidhi Company?

A Director is firstly required to be a member of the said company, and then, he must comply with the requirements prescribed under Section 152(4) of the Companies Act, 2013.

Is a Body Corporate allowed to become a Member in a Nidhi Company?

No, a Body Corporate is not allowed to be admitted as the member or shareholder of a Nidhi Company.

What is the status of a Nidhi Company?

A Nidhi company is required to be incorporated under the provisions of Companies Act, 2013, and shall acquire the status of a Public Limited Company.

Is a Salaried Person qualified to become a Director of a Nidhi Company?

No, such rules have been prescribed banning a salaried person from becoming a director of a Nidhi Company. However, the employment agreement of the said person may place some restrictions on him or herein doing so. How Is Nidhi Company Different From NBFC: A Complete Guide 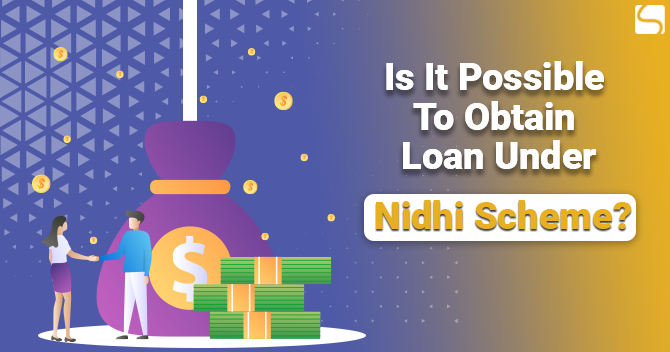 Is It Possible To Get a Loan Under Nidhi Scheme?

In today’s era, Nidhi Company has come out as a popular source for lending funds. Further, this business structure is most predominant in the Southern Region of India. The main...