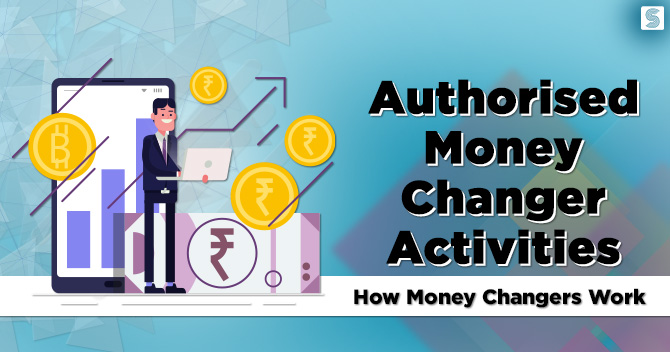 Authorised Money Changers are the authorised dealers, money changers, off-shore banking units or any such persons who have the authority to deal in foreign exchange or foreign securities under Section 10(1) of the Foreign Exchange Management Act. There are three kinds of authorised money changers in India:

An entity wishing to operate as a money changer in India must obtain the Authorised Money Changer License, or commonly known as Full-Fledged Money Changer License (FFMC License). The FFMC license can be obtained by filing an application with the Reserve Bank of India. The RBI is the regulatory authority that issues the guidelines as to how money changers work; the activities permitted and their compliance obligations.

The particulars relating to registration, renewal, cancellation, etc. of the FFMC license are provided under FEMA- the Foreign Exchange Management Act, 1999.

How Money Changers Work: Activities Allowed By the RBI

Foreign exchange can be brought into India in any form without restrictions or limit if it is stated on the Currency Declaration Form (CDF) to the Customs Authorities upon its arrival. When foreign exchange brought is not more than USD 10,000 or its equivalent in the form of currency notes or travellers’ cheques, or the value of foreign currency notes is up to USD 5,000 or its equivalent, such declaration to the CDF is not required by the authorities mandatorily.

No one can take out any kind of foreign exchange unless it is obtained from an authorised dealer or a money changer. However, the only exception to this condition is when a general or special permission is obtained from the Reserve Bank. Non-residents in India automatically have general permission to take out an amount not exceeding the amount originally brought in by them.

Purchase of Foreign Currency from Public

Authorised Persons and their franchisees are allowed to purchase foreign currency notes, coins and travellers’ cheques from residents as well as non-residents. If the foreign currency is brought through a declaration on form CDF, the tenderer must produce the same.

Requests for cash payment in Indian National Rupees can be made to resident customers for their purchase of foreign currency notes or Travellers’ Cheques up to the extent of only USD 1000 or its equivalent per transaction.

Requests for cash payment can be made to foreign visitors or Non-Resident Indians up to the extent of only USD 3000 or equal to the amount per transaction.

At the time of making payments in Indian Rupees to resident customers for their purchase of foreign currency notes or traveller’s cheques, payment can be made in cash, through account payee cheque, demand draft or loading in INR debit cards or electronic funds transfer through net banking in accordance with the set limits.

Authorised Money Changers in India are also allowed to issue a certificate of encashment purchases of foreign currency notes, coins and travellers’ cheques from residents as well as non-residents. These certificates must bear the authorised signatures and must be issued on the letterhead of the money changer. Additionally, proper records must be maintained for the same.

Purchases from other FFMCs and Authorised Dealers

A Full-Fledged Money Changer or a Non-Bank AD Category II can purchase any foreign currency notes, coins and encashed traveller’s cheques from other FFMCs and Authorised Dealers. Indian National Rupees which is equal to the amount of foreign exchange purchased must be paid only through crossed account payee cheque, demand draft, banker’s cheque, pay order or electronic funds transfer through banks.

Authorised Money Changers are allowed to sell foreign exchange up to the prescribed ceiling as laid down in Schedule III to the Foreign Exchange Management (Current Account Transaction) Rules, 2000 during a financial year. Authorised Money Changers can sell foreign exchange to a person resident in India to execute their one or more private visits to any foreign country, except to Nepal and Bhutan.

The exchange for such private visits can be availed via self-declaration basis to the traveller about the amount of foreign exchange availed during any financial year. Foreign nationals [1] who have been permanently resident in India are also eligible to avail this quota for private visits. This can be done when the applicant is not availing the facilities for remittance of his salary, savings, etc., to a foreign country.

Authorised Money Changers may sell foreign exchange to a person resident in India for the purposes of business travel or to attend a conference or specialised training, or for maintenance expenses of a patient going abroad for their medical treatment or check-up. Forex can also be sold to a person who is accompanying a patient going abroad for medical treatment or check-up up as their attendant to the limits specified in Schedule III to FEMA (Current Account Transactions) Rules, 2000.

Authorised Money Changers can also release foreign exchange for travel purposes as per the declaration submitted by the traveller about the amount of foreign exchange availed of during the financial year.

Any sale of foreign currency notes and coins within the overall entitlement of foreign exchange cannot be made up to the limits specified by the Reserve Bank of India for the country of the visit of the traveller.

Sales against Reconversion of Indian Currency

Authorised Money Changers are allowed to convert unspent Indian currency held by non-residents at the time of their departure from India into foreign currency if a valid Encashment Certificate is submitted.

Money Changers can convert unspent Indian currency up to a limit of INR 10,000 in possession of non-residents if the person provides sufficient reason for the inability to submit an Encashment Certificate after ensuring that the departure would happen within seven days.

Authorised Money Changers in India can also provide the facility for reconversion Indian National Rupees up to INR 50,000 to foreign tourists but not NRIs, against ATM Receipts. However, the following documents must be submitted:

Authorised Money Changers can also issue a cash memo upon a query to travellers to whom they sell foreign currency, on their official letterhead. The cash memo may be required to be submitted with the emigration authorities while leaving the country.

Authorised Persons can also put through transactions relating to foreign currency notes and travellers’ cheques at rates of exchange as per the market conditions and in accordance with the ongoing market rates.

Authorised Persons need to mandatorily display a chart that specifies the rates for purchase or sale of foreign currency notes and travellers’ cheques of foreign currencies and the card rates for any day. The same must be exhibited at a prominent place in or near the public counter and must be updated by 10:30 a.m.

An FFMC or Non-Bank AD Category II must also display a copy of the Money Changer Licence issued by Reserve Bank of India at a prominent place in or near the public counter, at each of its business places.

An FFMC or Non-Bank AD Category II must also keep balances in foreign currencies at reasonable levels and avoid build-up of idle balances for speculations on currency movements.

The transactions between authorised dealers and FFMCs must be settled through account payee crossed cheques, demand drafts or electronic funds transfer. However, the settlement must not be made in cash.

The Full-Fledged Money Changer or Non-Bank ADs Category II can obtain foreign currency notes from other FFMCs and Authorised Dealers (ADs) holding the FFMC license in India. They can do so against the payment in INR made by way of account payee crossed cheque, demand draft or electronic funds transfer.

When the Authorised Money Changer is unable to replenish its stock in this manner, it can file an application to the Regional Office of the Reserve Bank of India through an AD Category-I to get the permission to import foreign currency into India. The import must take place through the designated AD Category-I through whom the application is made.

The Full-Fledged Money Changer or Non-Bank ADs Category II can export surplus foreign currency notes or encashed travellers’ cheques to any overseas bank via the designated Authorised Dealer Category – I in foreign exchange to realise their value through the latter.

Full-Fledged Money Changers may also export surplus foreign currency to private money changers abroad. However, this may be done on the condition that either the realisable value is credited in advance to the AD Category- I bank’s Nostro account or a guarantee is issued by an international bank to cover the full value of the foreign currency notes or coins to be exported.

When the foreign currency notes purchased are found to be fake or forged, the Full-Fledged Money Changer or Non-Bank ADs Category II may write- off an amount up to USD 2000 in a financial year. This can be done after receiving the approval of the Top Management after exhausting all available options for recovery of the amount.

If any write-off more than the above amount including but not limited to foreign currency notes is found to be fake or forged, it would require the approval of the Regional Office of the Foreign Exchange Department of the Reserve Bank of India.

The Full-Fledged Money Changer or Non-Bank ADs Category II are allowed to transact money changer business only at the location mentioned in the Money Changer Licence. If the business plans to provide money changer services on a temporary basis on certain special occasions, a separate application must be made to the Regional Office of the Foreign Exchange Department of the Reserve Bank under whose jurisdiction the temporary money changing facility is proposed to be opened.

Detailed information such as the period for which the exchange counter would be in operation, the volume of business expected, the manner of accounting of the transactions, a letter from organisers to make the venue available for the money changing facilities, etc. must be submitted.

The Full-Fledged Money Changer or Non-Bank ADs Category II can open Foreign Currency Accounts in India after receiving the approval of the respective Regional Offices of the Foreign Exchange Department. However, the following conditions must be fulfilled:

The Authorised Dealers Category-II may open Nostro Accounts after receiving one-time approval from the Regional Office of the Reserve Bank. However, the following conditions must be met:

Consult Swarit Advisors’ experienced FEMA and RBI experts, who can help you with your Money Changer License Registration, audit requirements, compliance requirements and much more. 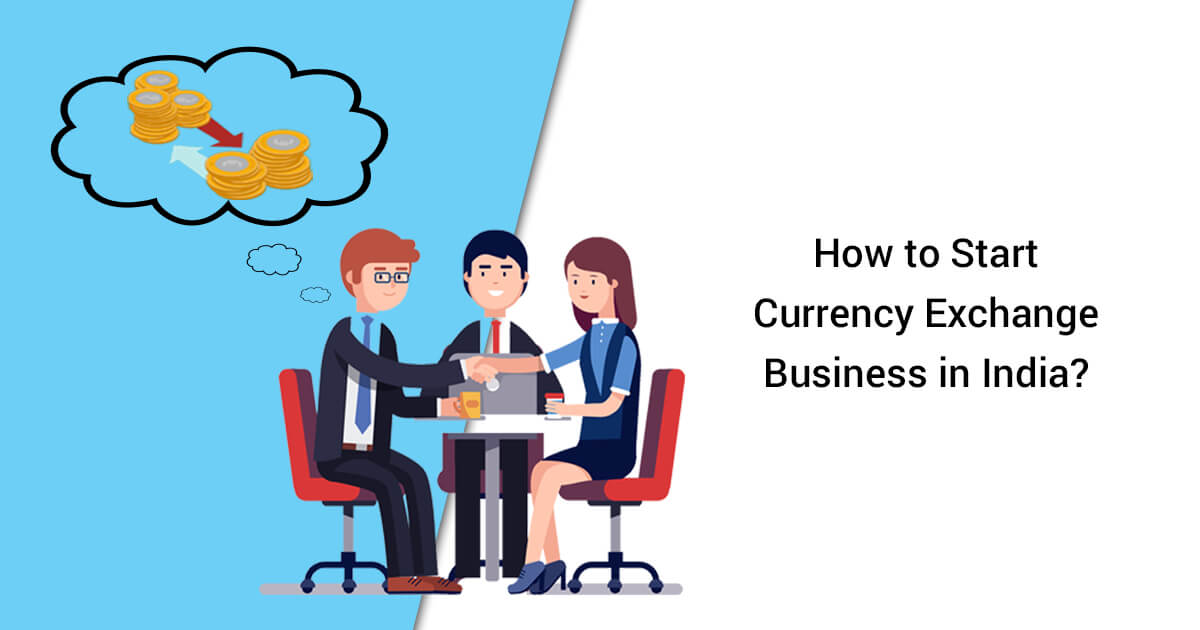 How to Start Currency Exchange Business in India?

The thought of starting a currency exchange business must have crossed your mind as there are higher chances of earning substantial profits in it. Though recently there has been a... India sustains a steady growth in the volume of foreign trade which enriches our country’s communication system and makes room for the traders to outreach the domestic boundary. The persistent... 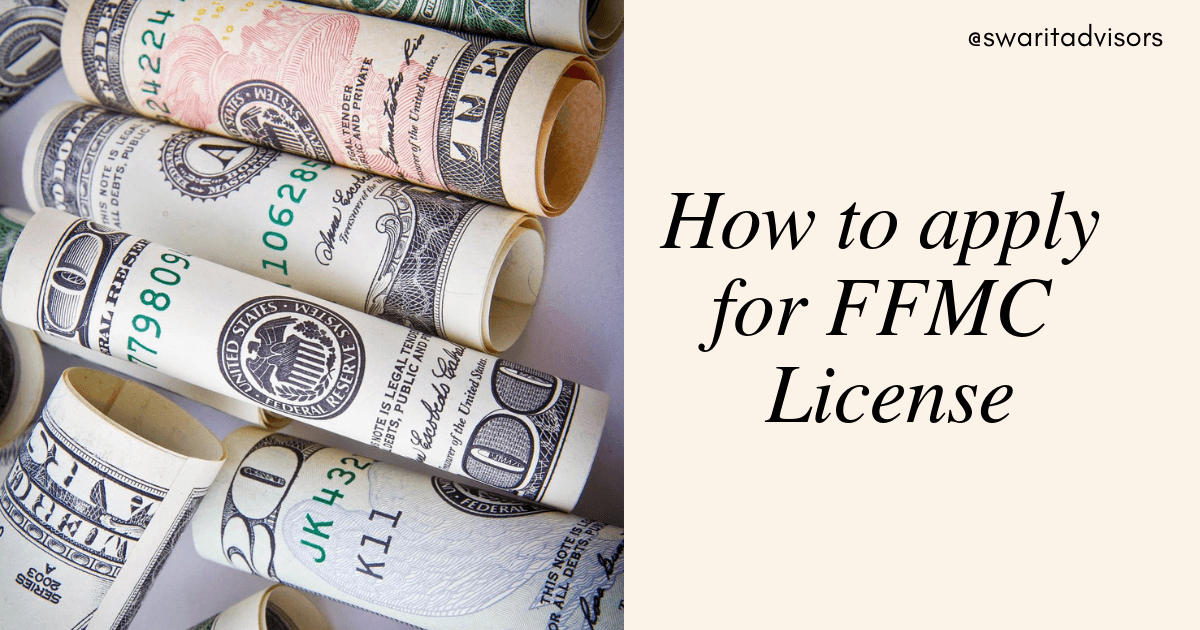 How to Apply for FFMC License in India?

Before we begin with how you can apply for FFMC License, it is pretty crucial to understand the actual meaning of FFMC license. Hence, in this blog, firstly we will...