Cross Border Mergers and Acquisitions in India: A Complete Guide 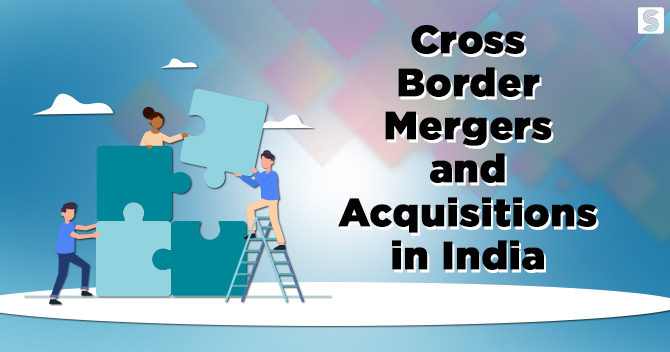 Businesses across the world are moving towards smarter collaborations by way of alliances with large corporations or new startups. Most businesses look for restricting their operational model through partnerships in the form of Mergers and Acquisition. When a business wishes to expand globally to meet the changing scenarios of globalisation and deglobalisation, it looks to collaborate with a business in another country. New government policies and the importance cross-border deals to grow globally, make it important for businesses to have comprehensive knowledge about cross border Mergers and Acquisitions. This blog talks in detail about cross border mergers and acquisitions in India, their meaning, laws applicable and types, along with the issues related to cross border M&A and their effects on businesses.

What is the Meaning of Mergers and Acquisitions?

The term ‘mergers’ is not defined under the Indian laws, but the concept of business mergers has been defined as the combination or amalgamation of two or more independent business entities that have different legal identities to form a single business venture.

Mergers generally take place when one large firm absorbs a smaller business or businesses. Commonly, companies look to merge with new startups or small businesses to merge their customer base, technology and operations. Mergers are segmented as horizontal mergers, vertical mergers and conglomerates.

An acquisition is another form of business alliance; however, in an acquisition, a larger company takes over a small company by purchasing it. This way, the larger company controls the share capital and all the assets and liabilities of the acquired business.

What are Cross Border Mergers and Acquisitions?

A foreign company that wishes to invest in India or establish its presence in the country can opt for cross border mergers or acquisitions with a domestic company which already has a customer base in the domestic market. In India, cross border M&As have increased in the past couple of decades, with an increase in investment deals between various Asia Pacific countries. Reports estimate a 200% increase in the number of such deals in the APAC countries, with companies from China, South Korea, Singapore, etc. opting for cross border mergers and acquisitions to set up their footprint in India. A flourishing market, liberalisation and globalisation paved the way for many foreign companies to see India as a potential and profitable business opportunity.

Cross-border M&As result in the restructuring of the assets and operations of the companies. Such deals allow companies to share their technology, goods, market strategies, know-how and capital. Cross-border M&As also contribute significantly to the country’s economy and invites more investments in the company.

Cross-border Mergers &Acquisitions in India come with the following benefits:

Cross border merger and acquisitions significantly give rise to the capital of the business, allowing it to function smoothly in the long run. It enables the new entity to expand its operations as and when required, purchase more land, buy more plants and machinery, develop its products and services, and much more. It also allows companies to share their intangible assets such as technology, and Intellectual Property like Trademark, Copyright and Patent.

With combination or acquisition between two companies, their technical know-how is also exchanged. They are able to share their management and operational strategies, IPR, risk management and planning strategies, etc. This, directly and indirectly, gives rise to more innovation and product development in the host country.

The laws that regulate cross border merger and acquisitions in India are as follows:

Inward and Outward Cross- Border Mergers and Acquisitions in India

The same has been provided under Section 234 of the Companies Act which was notified by the Ministry of Corporate Affairs by way of notification dated April 13. The notification provided the scheme to materialise inbound and outbound mergers.  The scheme also provided changes to the Companies (Compromises, Arrangement and Amalgamation) Rules, 2016 to allow cross border acquisitions.

Recently, the Reserve Bank of India (RBI) also came up with draft regulations, which were later notified and implemented from March 20, 2018. These regulations are named the Foreign Exchange Management (Cross Border Merger) Regulations, 2018 and lay down the complete framework for cross border mergers in India. These FEMA Regulations also provide the provisions related to exchange control in terms of inward and outward mergers.

Before the implementation of these FEMA Regulations, the company wanting to engage in cross border mergers was required to get an approval from the RBI before filing an application with the National Company Law Tribunal to obtain the permission to perform such mergers. This was made compulsory since such cross-border mergers led to a change in the ownership of assets and liabilities of the business. This prevented many investors from entering the Indian market due to the multiple regulatory requirements and additional permits required for the process.

The FEMA Regulations, 2018 provided a simpler way of performing these transactions. It stated that when the underlying transaction was as per the FEMA Regulations, the same would be deemed to have received the approval of the RBI. This was done to provide more liberal and welcoming option to invite foreign investors in India and increase foreign director investment in the country.

Additionally, before the FEMA Regulations, when the company resulting out of such inbound and outbound mergers was out of the permission scope of the Foreign Exchange Management Act, 1999 or FEMA Rules to hold assets or securities, it was required to mandatorily sell such assets or securities within 180 days from the date of scheme. In case the company failed to do so, the company was liable to pay penalties, stamp duty and tax, in addition to the fee, duty and tax paid to receive approval for the cross border merger.

However, the FEMA Regulation, 2018 has provided some relief in these regards to the foreign companies acquiring or holding assets or securities in India. Under the regulations, the company now gets a period of 2 years to sell such assets and securities. It has also permitted the foreign companies in outward mergers to open their Special Non-Resident Rupee Account (SNRR Account) as per the Foreign Exchange Management (Deposit) Regulations, 2016 for two years.

The FEMA Regulations have also simplified the provisions relating to the following when it comes to inward or outward mergers in India:

These changes have simplified the manner in which cross border mergers and acquisitions are executed by Indian and foreign companies. The new regulations have reduced the complexities and allowed more Indian companies to expand their operations by inward and outward mergers.

The FEMA Regulations also provide the meaning of cross border mergers in India. The Regulations define cross-border mergers as merger, amalgamation or arrangement between an Indian company and foreign company under the applicable laws. This definition has more scope and covers various kinds of transactions as compared to Section 234 of the Companies Act.

Political Issues: When it comes to defence and other security-related sectors, cross border mergers and acquisitions are heavily affected by the political climate between India and other countries.

Cultural Differences: Cultural differences between countries also pose numerous threats to successful cross border mergers and acquisitions. Foreign companies entering India are unable to cope up with the cultural difference, and this often leads to failure of such transactions.

Legal Issues: There are numerous legal and regulatory requirements associated with cross border mergers and acquisitions. This discourages many companies from opting for such transactions and often leads to foreign companies walking out of their merger and acquisition deals.

Taxation Issues: Taxation and accounting requirements to be followed in cross border mergers and acquisitions can be overwhelming. This may make it difficult for the resulting company to cope up with the taxation compliances and affect its tax planning and management.

Issues Relating to Due Diligence: Due diligence can also impact the stipulations relating to cross border merger and acquisition transaction. It can also affect the structure of the deal, price relating to it, and the asset sharing structure between the companies.

Cross border mergers & acquisitions allow companies to collaborate with companies in other countries by the way of controlling all the assets or a percentage of a company’s assets. Cross border M&As have become a popular choice for businesses to leverage the advancement and developing markets in other countries. Such transactions also lead to an increase in the price of a company’s shares and give rise to more foreign direct investment deals.

However, there are various aspects of mergers and acquisitions to be carefully considered before opting for the restructuring of a business. Additionally, the various issues associated with cross border M&As also make it important for a business to carefully assess its options before transacting with a foreign country. Similarly, a foreign country must carefully assess the legal and regulatory requirements associated with cross border transactions for entering the Indian market. This makes it crucial for Indian and foreign companies to consult M&A business experts before finalising their deals to ensure that the FEMA regulations and law are adhered to and the interest of both the companies is protected.

Also, Read: Mergers and Acquisitions: Trends and Outlook in this Sector.