Form ITR 7: A Comprehensive Guide on This Income Tax Return 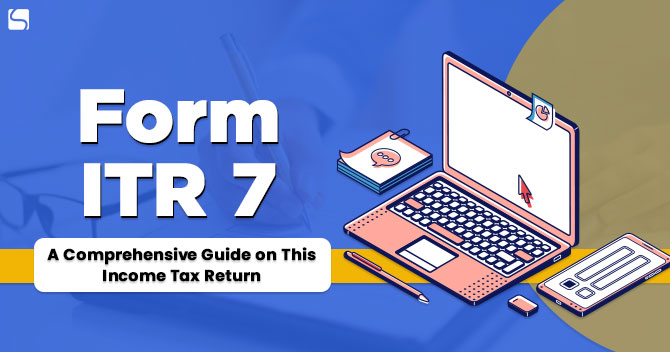 In this blog, we will discuss the concept of “Form ITR 7”, together with the changes made and the procedure for filing it.

The legal document in which a taxpayer or assessee informs the government and income tax department about the income earned by him/her in a financial year is known as Income Tax Return.

Moreover, there are different ITRs forms available for different individuals and businesses, and the process of filing Tax Return is known as Income Tax Return Filing.

Brief Analysis of ITR Forms 1 to 6

The brief analysis of ITR Forms 1 to 6 can be summarised as:

The term “Form ITR 1” means an Income Tax Return or ITR that is filed by the individuals who are Resident other than Not Ordinarily Resident (RNOR) and are having an annual income of Rs 50 lacs. Further, the other name for Form ITR 1 is Sahaj.

The term “Form ITR 2” means an ITR or Tax Return that is filed by the HUFs (Hindu Undivided Families) and Individuals who are not earning income under the head of Profit and Gain from Business or Profession (PGBP).

Further, this tax return is not applicable to the individuals who are furnishing Form ITR 1 or Sahaj for their Income Declaration.

The term “Form ITR 3” means an ITR or Tax Return that is filed by the HUFs (Hindu Undivided Families) and Individuals who are not generating income from the Profit and Gain from Business or Profession (PGBP).

Further, this tax return is not applicable to the individuals who are furnishing Form ITR 2 with the Income Tax Department for their Income Declaration.

The term “Form ITR 4” means an ITR or Tax Return that is filed by a taxpayer, who is falling under the domain of “Presumptive Income Scheme”, mentioned under section 44AD, section 44ADA, and section 44E of the Income Tax Act 1961. Further, the other name for Form ITR 4 is Sugam.

Further, all the Heads of Income except the income stated under section 11 of the Income Tax Act 1961 are covered under this Tax Return.

The term “Form ITR 6” means an ITR or Tax Return that is filed by the companies which are not eligible for exemption under the provisions of section 11 of the Income Tax Act 1961. Further, this section deals with the income from property held for Charitable and Religious Purposes.

Who is Eligible to File Form ITR 7?

The ones who are eligible to file Form ITR 7 are as follows:

Further, the individuals whose income are exempt under the provision of section 10 and is not filing any return under section 139 can file this ITR as well. The list of such individuals is as follows:

Due Dates of Filing Form ITR 7

The due dates for filing Form ITR 7 depends upon the Audit of the Company’s Account. The tax assessee who needs to get his/her audit can file a tax return till 31.10.2020. However, the individuals who do not need to get their account audit can file ITR till 30.11.2020.

The Central Government and the Income Tax Department have introduced 4 new declarations under the head of Basic Information for the A.Y. 2020-2021. These declarations are mentioned under “Details of Registration or Approval under the IT Act”.

Further, the declarations introduced are as follows:

This newly introduced schedule, named PTI, will include the details and information mentioned as follows:

As per the amended form ITR 7, two points have been removed from PART B (Total Income). The points removed are as follows:

Addition of New Point under Part B

As per the amended form ITR 7, a new point has been in Part B under the tab “Computation of Tax Liability on Total Income”. The point added is as follows:

As per the new ITR form 7, the applicant or taxpayer who is a Non Resident Indian or NRI and is not having any opened Bank Account in India, but wished to claim a refund of the Income Tax paid, requires to submit the details and information as follows:

The structure of Form ITR 7 is divided into 4 parts which can be summarised as:

Part A of the tax return deals with the Basic Personal Information of the Taxpayer or Assessee. Further, the same has been made compulsory by the Income Tax Department from the A.Y. 2019-2020.

This section of the Form includes the details regarding the Total Income and Tax Computation of the Taxpayer income liable for taxation.

In total, there are 23 schedules which are as follows:

This section of Form ITR 7 deals with the declaration that whatever the information is filed, the taxpayer or assessee is the best of his knowledge and understanding.

The different modes of filing Form ITR 7 are as follows:

A Taxpayer or assessee can easily download Form ITR 7 from the official portal of the Income Tax Department. The reason behind the same is that there are no offline tools offered by the IT Department to file Form ITR 7.

There are 2 different modes through which a taxpayer or assessee can file Form ITR 7, which are as follows:

The particulars of Offline Process are as follows:

What are the Modes of Filing Form ITR 7 offline?

The different offline modes for Filing Form ITR 7 with the authorities are as follows:

Who can File ITR 7 offline?

The ones eligible to file ITR 7 offline are as follow:

The particulars and details of Online Procedure are as follows:

Who can File ITR 7 online?

Every individual or business which is not included under the offline mode of filing form ITR 7 needs to file the tax return on a compulsory basis.

How to File ITR 7 online?

The steps included in the procedure to file Form ITR 7 online are as follows:

Firstly, the taxpayer or applicant should download the ITR Form 7 from the official Income Tax Website, by visiting at http://www.incometaxindiaefiling.gov.in/home;

Fill in the Details

In the next step, the assessee or taxpayer requires to furnish all the information and details asked in different sections and parts of the e-form.

After that, the said applicant needs to obtain Verification and Authentication for his/ her ITR Form 7 in the modes specified as follows:

Lastly, the concerned taxpayer, assessee, or applicant who wishes to submit his/ her tax return form online will receive an e- mail of acknowledgment from the Income Tax Department on his/ her registered email id.

However, if in case the assessee or applicant wants to send the Tax Return manually or physically by downloading the same from the official IT portal, then he/she needs to courier or speed post the same to the CPC Office of IT Department, situated at Bangalore, India, within a period of 120 days, commencing from the date of filing or submitting of the ITR Form 7.

Moreover, it shall be noteworthy to mention that ITR Form 7 is an annexure less Tax Return, which means there is no requirement for the applicant or taxpayer to annex any record or document.

In a nutshell, all the Companies or individuals that are claiming exemption under the provisions of section 11 of the Income Tax Act 1961 need to submit ITR Form 7 with the authorities of the Income Tax Department.

Further, the due dates for filing Form ITR 7 depends upon the Audit of the Company’s Account. The tax assessee who needs to get his/her audit can file a tax return till 31.10.2020. However, the individuals who do not need to get their account audit can file ITR till 30.11.2020. What is the procedure of Income Tax Return Filing for Trust?

In India, Non-Profit Organizations (NPOs) can be registered as a Society, Trust or Section 8 Companies. The sole purpose of such organizations is to undertake public welfare activities for a... Income Tax Return (ITR) is no less than a nightmare to taxpayers. After all, who likes to pay tax? Possibly, nobody. But if you don't file ITR in time, you... 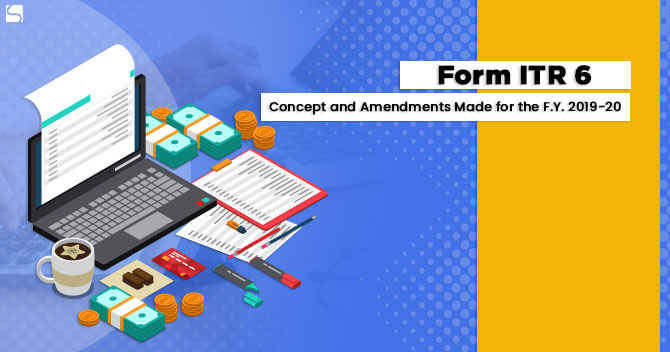 The term “Form ITR 6” denotes an Income Tax Return filed by the companies that are not claiming exemption under section 11 of the Income Tax Act 1961. Further, section...