BIS Certification is a means for giving third party guarantee of quality, safety, and reliability of products to the customer. BIS Certification is voluntary in nature and is issued by the Bureau of Indian. The Government of India has made BIS certification mandatory and compulsory for certain products.

How to Start a BIS Certification

Nowadays, almost every product needs a genuineness mark to authenticate its purity. BIS (Bureau of Indian Standards) Certification is a way of ensuring customers about the quality and standards of a product. Through this certificate, buyers get the assurance that a product is safe for use. Moreover, it is pertinent to note that obtaining BIS Certification is optional for various products in India. However, there are some products for which the certification has been made compulsory by the Indian Government, taking into consideration public health and safety.

The term BIS stands for the “Bureau of Indian Standards”. It is a National Standard Body of India, consisting of25 members and is engaged in the preparation, execution of standards, certification of schemes concerning products and testing and standardization services. The headquarter of BIS or the Bureau of Indian Standards is located in New Delhi. It also has five Regional Offices situated in Chennai (Southern), Kolkata (Eastern), Mumbai (Western), Delhi (Central), and Chandigarh (Northern).

What are the objectives of BIS Registration? 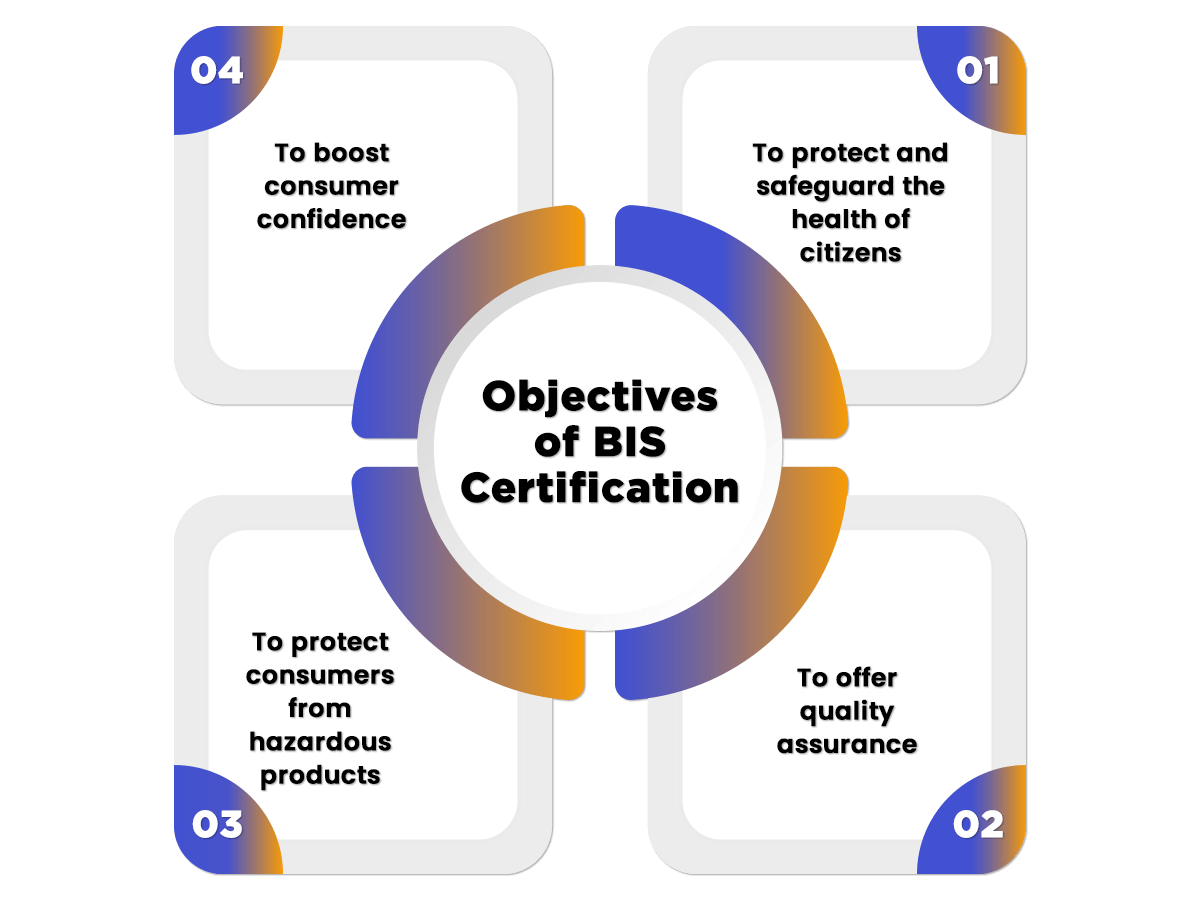 The following are the main objectives of BIS registration in India:

What is the Governing Law for BIS Certification?

In India, the Bureau of Indian Standards Act, 1986 acts as the governing force for the issuance of BIS Certification. Moreover, the BIS Act, 1986 was brought into force on 20.11.1986 and the enforcement of this act reduced the ambit of ISI (Indian Standard Institution) Mark. At present, over 350 BIS Registrations have been granted for over 50 Indian standards in 40 countries.

There have been hundreds of advertisements proudly proclaiming that the product bears ISI Mark. The term, “ISI” stands for the “Indian Standards Institute” which was established on 06.01.1947.

ISI is a national body which was established during the period of Independence to provide benefits of standardisation to every consumer in India. However, by the end of the mid-80s, situations and conditions changed and it sparked off the need to have a stronger governing organisation. The reason for the same was that the ISI (Indian Standards Institute) did not have any authority regarding the formulation of standards and other associated work besides the product certification.

Therefore, to broaden up the scope and offer more power and control to the staff concerning assets and liabilities, the Government of India brought BIS (Bureau of Indian Standards) into the picture on 20.11.1986.

Who can apply for BIS Certification?

All Manufacturers of the products notified under the Compulsory Registration Scheme, whether located in India or outside India need to obtain registration under CRS. However,

Which Products come under the criteria of BIS Registration?

The products which come under the criteria of mandatory BIS registration are bifurcated into 2 sub-parts listed below:

The following list comprises of the products that fall under Scheme 1 (Mark Scheme):

The following list comprises of Electronic and IT products:

What are BIS Certification Schemes?

What are the Different Types of BIS Certification Scheme?

The BIS Certification is provided only for the products which are covered under the following schemes:

The Documents which an individual needs to submit for the process of BIS Certification are bifurcated into two parts:

The first part deals with the technical aspect of the products collected for a lab test. The information of the manufacturer must be submitted in the construction details of the product like:

In the second part, the manufacturer or applicant is required to submit all the Factory Documents and Details in the Application form for BIS Certification, which includes the following basic details of the manufacturing unit:

The procedure for obtaining BIS Certification takes around 30 to 35 days to complete. It also includes the testing time of 15 to 20 days and the BIS Application processing time of 10 to 15 days.

The following steps are included in the process of licensing for bis registration:

Once the process of Inspection is completed, the next stage is the Surveillance stage in which a complete factory survey is conducted. The following steps are involved in the process of surveillance:

What is Compulsory Registration Scheme?

As per this order, no individual is allowed to either manufacture or stack the listed items for sale, purchase or import. However, the said list of 15 categories has been expanded further to 50 products by the Ministry of Electronics and Information Technology.

Further, for products that are produced domestically, the Compulsory Registration System (CRS) is relevant according to the manufacturing date. However, for the products being imported, the date of landing for the concerned product is considered effective.

What is the Validity Period prescribed for BIS Certification?

The BIS certification is valid for two years. Moreover, BIS Certification can be further renewed if there is no change in the prescribed standards and concerned product. Also, the renewed certificate will be valid for a minimum of one year and a maximum of five years.

What is the Procedure prescribed for Renewal of BIS Certificate?

What are the objectives of BIS Certification?

The main objectives of BIS Certification are to protect and safeguard the health of the citizens; Offer quality assurance; Protect consumers from the Hazardous Products; and Boost consumer confidence.

What is BIS Certification?

The term “BIS Certification” denotes the quality assurance, reliability, and safety of the third party from a product. It is compulsory for every manufacturer notified under the Compulsory Registration to obtain BIS Certification in India.

What does BIS stand for?

The term BIS stands for the “Bureau of Indian Standards.” It is a National Standard Body of India engaged in the preparation, execution of standards, and certification of schemes relating to products. It also provides testing and standardization services in India.

Where is the Headquarter for the Bureau of Indian Standards located?

The headquarters of the Bureau of Indian Standards is located in New Delhi. It also has 5 Regional Offices situated at Chennai (Southern), Kolkata (Eastern), Mumbai (Western), Delhi (Central), and Chandigarh (Northern).

As per a notification issued by the BIS on April 2018, there are different groups having a total of 116 products that need to obtain BIS Certification in India. These groups include Cement; Household Electrical Goods; Batteries; Food and related Products; Oil Pressure Stoves; Automobile Accessories; Cylinders, Valves, and Regulators; Medical Equipment; Steel and Stainless-Steel Products; Electrical Motors; Electrical Transformers; Capacitors; Chemicals and Fertilizers.

Is it mandatory to obtain BIS License for the Import of Goods in India?

Yes, it is mandatory to obtain a BIS License for the import of goods falling under the notified scheme. That means such goods can only be imported in India if they have a standard mark under the BIS Certification.

Is the applicability of CRS based on the manufacturing date or import date?

For products that are produced domestically, the Compulsory Registration System (CRS) is relevant according to the manufacturing date. However, the products which are being imported in India, the date of landing, will be considered effective.

Who are all eligible to apply for the Compulsory Registration Scheme?

All the Manufacturers of the products notified under the Compulsory Registration Scheme, whether located in India or outside, need to obtain CRS Registration.

In the case of multiple series and models, what is the procedure for testing?

According to the Guidelines issued for the Series Approval of Products, only one sample out of a series of every ten models will be chosen for testing. Further, this rule states that the product having the worst configuration as per the safety designed consideration will get picked for the test.

Yes, if in case a common test report is being engendered, then there is a need that all the brands must be distinctly enumerated out in the report.

Is the Compulsory Registration Scheme applicable to spare parts as well?

No, the CRS or the Compulsory Registration Scheme is applicable to only the Products and not on the Spare Parts.

How is a Label marked post-certification?

The items or the piece of information that to be marked on a label are Brand Name; Product Name; Model Number; Input and Output Wattage; Name of the Country where the said product has been manufactured; and Name of the Manufacturer. Further, the label marked should be of such a quality that the same cannot be rubbed, washed, or scratched off by anyone.

In which all cities do Swarit Advisors provide their services?

What is the Validity of a Test Report?

According to the BIS Rules and Regulations, the Test report must not be older than 90 days as on the submission date of the application form.

When can a BIS Certification be cancelled?

A BIS License stands cancelled under the provisions of Rule 11 of the BIS (Conformity Assessment) Regulations, 2018.

Who is liable for the testing of Imported Goods?

The manufacturer or its authorised Indian representative has the responsibility to get the products registered with the Bureau of Indian Standards.

Can an Individual submit one application for different products produced at one factory premise?

No, the manufacturer needs to file a separate application for each product and for each factory location.

How much is the Time required for granting BIS License?

Normally, a period of 6 months is needed by the authorities to grant a BIS License. The period will start from the date of the receipt of the application. However, the same can vary for reasons like transportation of samples; remittance of dues; organising inspection; and delay in giving responses to the queries raised.

Can an individual submit one application for one product being manufactured at different locations?

No, the manufacturer needs to file a separate application for each factory location.

Which regulations deal with the provisions regarding the use of the standard mark?

Regulation 6 of the BIS (Conformity Assessment) Regulations 2018 deals with the conditions for the use of Standard Mask. What is the Purpose of BIS Registration and Why we need this? 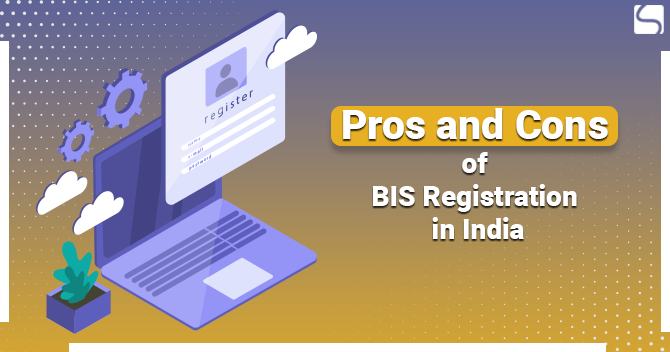 Pros and Cons of BIS Registration in India

The Bureau of Indian Standard (BIS) plays a very important role in assuring that the goods reached out to the consumers are of certain standard and are safe to be... 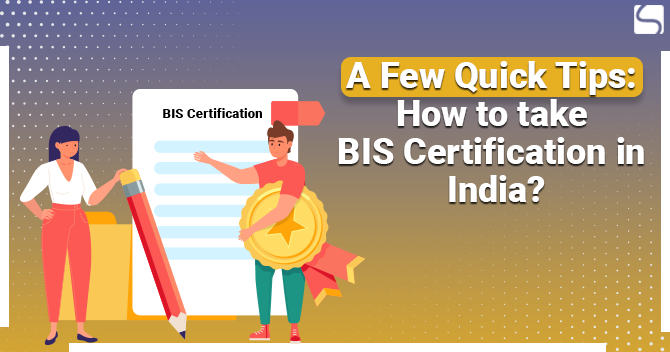 A Few Quick Tips: How to take BIS Certification in India?

Bureau of Indian Standards (BIS) works towards maintaining the safety, reliability and quality of the products in India. It is very important to ensure that the products that are being...